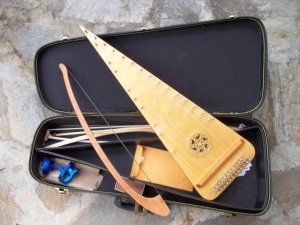 I love to learn a great many things.

I especially enjoy research, too!

I’m delighted to be able to attend a music class very soon at the John C. Campbell Folk School and learn more about how to play the bowed psaltery!

The bowed psaltery is a musical instrument which is at least 2000 years old and is mentioned in the Bible. (The instrument pictured here is only five or six years old.) It is played by holding the wide end in the crook of one arm with the pointed end resting in the same hand. The bow is held in the other hand and passes across each string; one string equals one note. Yes, it psounds different too. When the bow glides across the silver strings, it gives me an emotional feeling that is both haunting and inspirational at the same time.

The garden will be growing and I will be, too.